A new year, a fresh start, the perfect chance to… fail??

For a lot of us, January is a chance to start something new. I’m no different. With one caveat however. If I fail in January, it’s not game over. It’s just the beginning. A chance to learn and then try again.

January was quite the month for me. I was expecting it to be a chill, relaxing start to the semester where I could really focus on my writing and reconnecting with my friends. Boy was I in for a surprise.

A quick little recap. January began with a short trip to Florida with my family to see my younger brothers play in a soccer tournament. It was a surprisingly cold and sleep-depriving trip, but I was on a roll with my writing. I was feeling really good about my prospects for success with this month’s challenge: to write 1000 words every day. When I moved back to school, everything hit me like a brick. I forgot how many hours are lost every January to rush (for my sorority). On top of that I suddenly had to prep for a bunch of job interviews and the status of my graduation also became unclear. And on top of those obligations, I really wanted to see all of my friends, as I had been abroad last semester and had recently learned how imperative social time is to my mental health and perceived well-being. And to top it all off, I stopped doing my daily reflections for an entire week. I did that one to myself.

So what did I learn in January? Looking back the #1 thing I learned is how essential my daily reflections are. You know how people say you don’t know a good thing until it’s gone. Well that’s pretty much how I felt about my daily reflections this month. Despite reflecting on my day every single day religiously for a year, and seeing the benefits over and over again, I didn’t really understand how much I have come to depend on this cathartic reflection until this month. You can be sure that I will not be skipping a week ever again. The problem arises when my sleep gets out of control. Since sleep is my #1 most critical habit, I will sacrifice pretty much anything for sleep if it really comes down to that. However, this is also where it gets tricky. Because I know that sleep is one of the few things that I value over my daily reflections, it makes sleep the prime target for an excuse. So for that week where I didn’t do my reflections I really was sleep deprived, but it wasn’t the 5-20minutes from my reflections that were really the cause of this sleep deprivation. And on some level, buried way deep down there, I knew that. But I chose to avoid that feeling because I’m human and (frequently) make mistakes. Let it be known that anytime I stop doing my daily reflections for more than a day, it is 100% guaranteed that I am avoiding something, even if I don’t want to believe it. The next big thing that I learned in January is that I need to avoid dangerous cyclic behavior at all costs. Because I like productivity, I have a natural proclivity towards working in sprints. While I don’t think this is inherently bad, the way that I usually realize this tendency is dangerous and not sustainable. I tend to sacrifice sleep, routines, and mental sanity for weeks on end to get to the end of whatever my current sprint is focused on, and then lapse into total and utter degeneracy. After which, a sprint is absolutely necessary to catch back up again. Now I’m convinced there is definitely a good way to leverage sprints, but I don’t quite think I’ve cracked the code on this yet. So for now, I’m focusing on consistency. You’d be surprised at the reach of even just sleep alone. So how did I learn to avoid cyclical behavior with respect to sleep? Stay between 6-9 hours of sleep every day, the more consistent the better, if at all possible. This might seem somewhat straightforward, but for a sprinter like me, it’s revolutionary. I used to sleep 4-6 hours a night for an extended period of time, followed by repeated days of 12, or even 14 hours of sleep. So while the sum at the end of the month following this pattern might be ok, it completely wrecks any sense of stability in my life. Sleeping for 4-6 hours a day usually means I’m working really long days on really low energy levels. On the flip side, sleeping for 12 or 14 hours a day means I’m probably never really awake during the now very limited hours of the day that I do have. And so nothing gets done. This cycle also destroys my routines and tests my mental stability. I don’t know how it took me 21 years to learn this lesson, but I’m very glad I learned it now. I swear my life has already changed since I had the revelation.

If you’re still not quite sure what I mean by “cyclical” behavior, take a look at this graph of the # of hours I slept each day in January. I was sleeping between 3.5 - 10 hours a night. I imagine it would have been even worse if I had not learned last month that I do surprisingly poorly on > 9 hours of sleep. 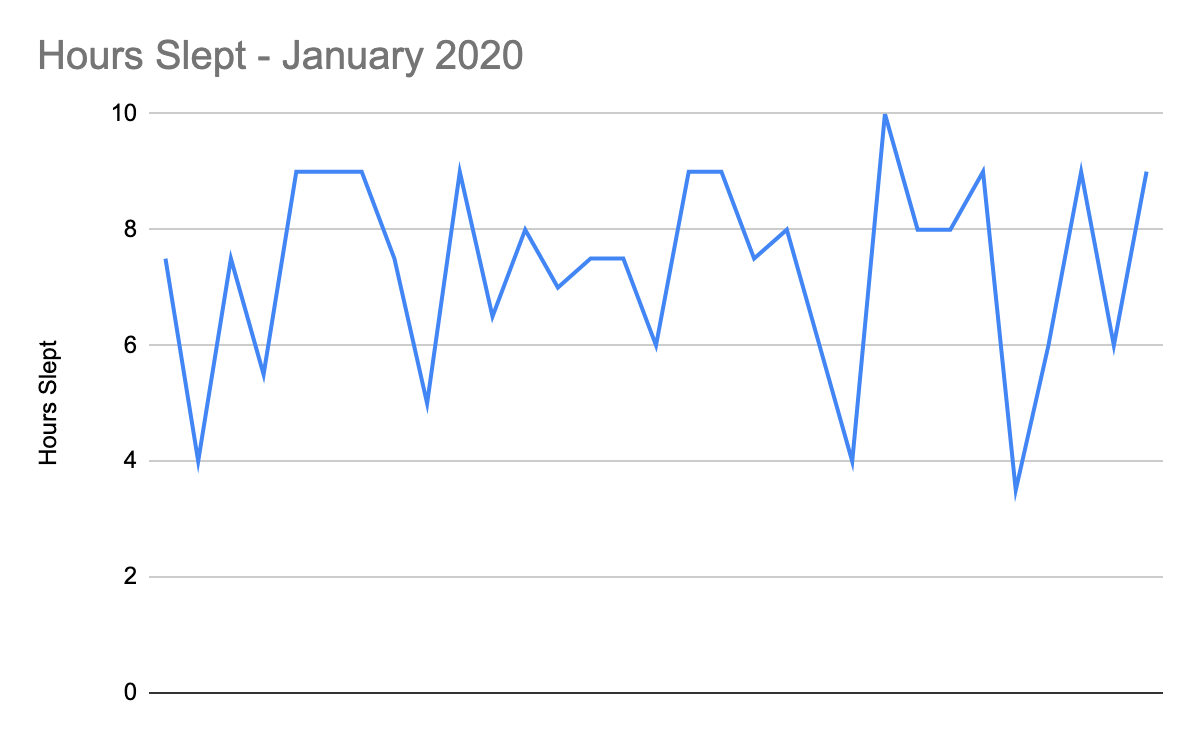 Now here’s a look at the first 8 days of February: And yes there are fewer data points but you can already see how much more consistent my sleep is here (between 7.5-9 hours). And yes I can already feel the difference.

And while my 30 day challenge to write 1000 words every day in January was a total flop, I learned so many important lessons and I’m ready to try again in February :)

Grace Brentano
—
January: a month in review.
Share this