I couldn’t explain how or why I thought this, but I felt it so strongly that I almost started crying. I know 21 is a little old to be figuring out the answer to “What do you want to be when you grow up?” but that was the first time I felt like I had a real answer.

At first, I did nothing. While I’m notorious for making impulsive decisions and trusting my gut instinct, that was exactly why I wanted to take it slow this time. I wanted to think and really consider if this was a serious, deep-set belief or just another passing thought attached to by my mind. About a month later, I still felt like I wanted to be a writer, and I still had no answers to any of the aforementioned questions. At this point, I decided to see if I could logically arrive at the conclusion that I should be a writer, instead of just blindly trusting my intuition.

I started by asking my parents what I wanted to be when I grew up. 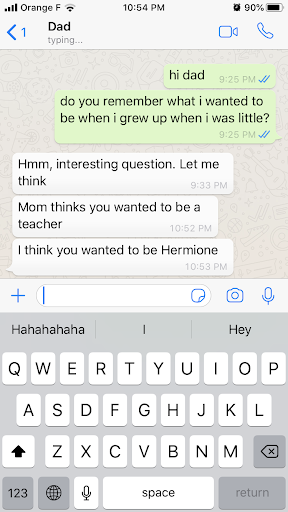 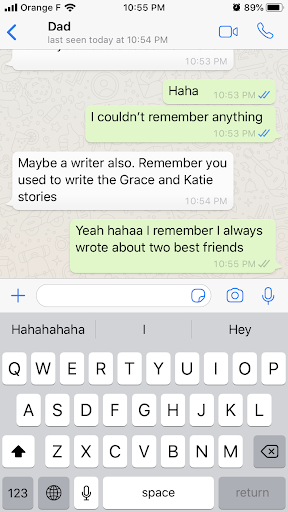 Based on my parents’ first answers to the question, I probably didn’t even have a consistent answer when I was little. But then, my dad’s second answer gave me hope, “Maybe a writer also.” His answer reminded me that I always used to write little fiction stories when I was younger. Now I wasn’t the most creative writer as my stories were always centered around me and my best friend, but I was writing. For fun. Completely of my own volition. I didn’t really do many other things outside of school and extracurriculars then, so I’m guessing what I did do means a lot.

People always say to look at what you liked doing as a kid to figure out what you really like doing. Besides writing, I also remember being an obsessive reader. Close enough to writing; that one’s easy. I also loved making YouTube videos. This one’s a bit trickier, but if you think about YouTube as a form of visual storytelling then you can see how that could also be tied into writing. So far, wanting to be a writer is looking very plausible.

But then, I started thinking about all the counter-evidence. In middle school, I was obsessed with math. I loved problem solving and even competition math. I asked to go to sleep-away math camp. Twice. During this period of my life, I don’t remember writing anything, or even thinking about writing. The high school I attended had a really strong writing program: we had visiting writers, incredible writing teachers, and yet still no thought of writing or being a writer. The closest thing I did to writing was journaling, but I’m not exactly sure that counts. I went on to apply to colleges as a computer science major and now I’m in my last semester of college doing a double major with computer science, cognitive science, and a math minor. Still no writing. I will say that in college I started developing a very mild interest in blogging, but I never thought about it from the perspective of wanting to a writer. It was always about wanting to share an opinion or perspective. But for that reason, I started writing. In January of last year, I think I wrote maybe 6 or 7 one page posts (those posts still exist today - they are the beginning of my Kaizen by Grace “getting started” series!). But I had no habits centered around writing and I didn’t write anything else for months.

So at the end of my “logical analysis”, I was just as undecided as when I started. I probably could have predicted as much, but it was worth a shot. So what next?

I still couldn’t shake the gut feeling that this random epiphany just felt… right. So, back to the questions.

At this point, I felt like I had explored all of the “mental experiment”-type solutions and it was time to take action. To figure out if I really like writing, I would have to… well… actually write.

In October, I tried to write, but I was always stuck. I had no idea what to write about and found myself waiting for strikes of inspiration to hit. I think I wrote two articles. After the second, I was convinced that I had found “what I wanted to write about”, but I never wrote about it again. Was I just being lazy? Or was it the wrong subject?

Clearly, just trying to “write” was not a tenable solution. I had no habits around writing, and I’m a big believer that habits are the basis of any lasting change. So if I wanted to incorporate writing into my life, to figure out if I actually like writing, I would need to build a habit around writing.

And how do we build any habit? Tiny, little baby steps.

So what is the smallest first step that I could take? Write every single day. It wouldn’t have to be a lot and the subject wasn’t important, I just wanted the habit. The first tiny step. So, in November I challenged myself to write one Kaizen by Grace post every single day. They would be short posts with predetermined subjects, as I had already outlined topics for the first 50 or so. And as a bonus, I would make progress on that series, which I had abandoned for a solid 9 months. I was excited.

But then, I didn’t do so well. Turns out going from writing nothing to writing something every day is a pretty big leap to make. I ended up writing only 10 of the 30 days. While I was disappointed because I didn’t really feel like I had developed a “habit of writing” by the end of the month, I still written 10 more posts than I had the rest of the year, and was ready to try again in December. Sometimes habits just take a little more time to develop.

In December, I fared much better; I wrote 27 out of the 31 days! And as a bonus, I finished pretty much all of the Kaizen by Grace posts I had planned. Boom writing every day was a habit!

So next step - what do I want to write about? And as much as I love brainstorming, I don’t see any way to properly answer this question without, surprise surprise, writing. So in January, this month, I am challenging myself to write 1000 words a day. I know this is a serious step up from last month, but I’m hoping that the increased word count will give me space to figure out what I like to write about, and that the habit of writing daily built over the last two months will be a big enough stepping stone to build off of.

Grace Brentano
—
What do you want to be when you grow up?
Share this